Your Health on the Ballot: Alzheimer’s advocates ask candidates where they stand

/ Your Health on the Ballot: Alzheimer’s advocates ask candidates where they stand

As the 2020 presidential election rapidly approaches, debate is swirling around campaign issues ranging from the economy to immigration to gun control. At the forefront of these is health: a candidate’s stance on Medicare, insurance premiums and drug pricing.

But for the millions of families impacted by a chronic disease, like Alzheimer’s, health means more than insurance coverage: it’s about investing in research toward treatment and a cure, and access to resources to help with the financial, physical and emotional strain.

During the fall of 2019, we followed three voters and advocates who weren’t satisfied waiting for a potential sound bite from the campaign trail. Working with the Alzheimer’s Impact Movement, a separately incorporated advocacy affiliate of the Alzheimer’s Association, these advocates set out to ask candidates face-to-face about their plans to address Alzheimer’s. 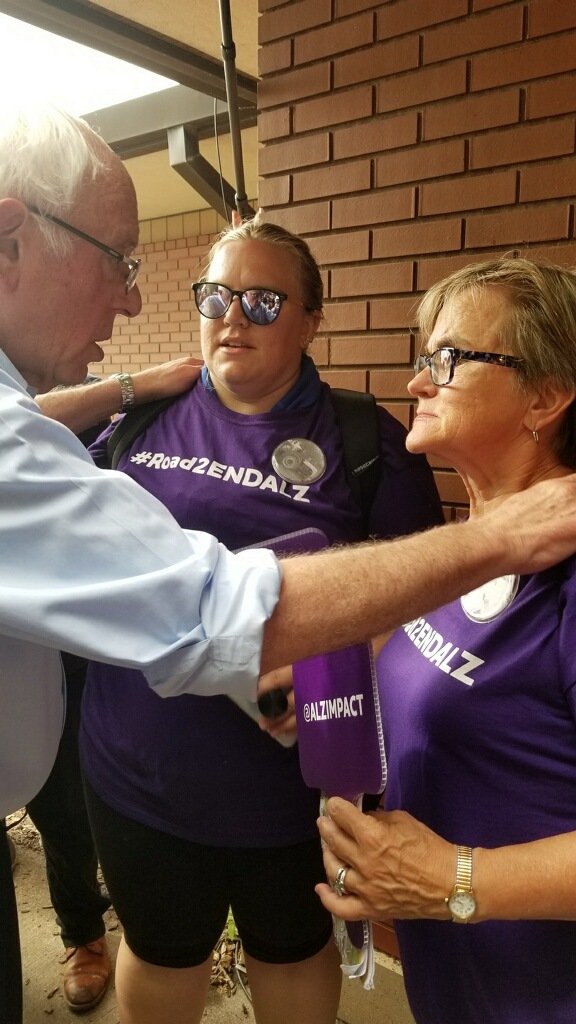 Kate Klosterman became an Alzheimer’s advocate and caregiver at the age of 19 when her grandmother was diagnosed with the disease. Later, her grandfather also developed Alzheimer’s, further cementing her commitment to the cause. Kate traveled from Coon Rapids, Minnesota, to the Iowa State Fair to press candidates on their approach to Alzheimer’s.

“I don’t want other families to have to go through the same things we have been through,” says Kate. “Talking with these candidates in a public setting encourages them to help us out when they are actually elected.”

At the fair, Kate visited the Soapbox — where candidates make their pitch to be our next leader and take questions — and spoke with a wide range of candidates, including Senators Amy Klobuchar (D-Minn.) and Bernie Sanders (D-Vt.), and former Governor Bill Weld (R-Mass.).

“I know the effort I put into meeting with these candidates, making sure my questions are asked and answered, and sharing my story makes a difference,” Kate says. “It lets candidates know how important this issue is for everyday Americans.”

Kate stresses that the most critical part of any interaction with a candidate is sharing your story.

“The first time I shared my story with Senator Klobuchar, I sobbed through the whole thing,” Kate says. “She came up to me afterward to give me a hug, thank me and tell me how brave I was. Who knows if she remembered all of the details of the bills we had discussed that day, but I am confident that she remembered the impact of my story.” 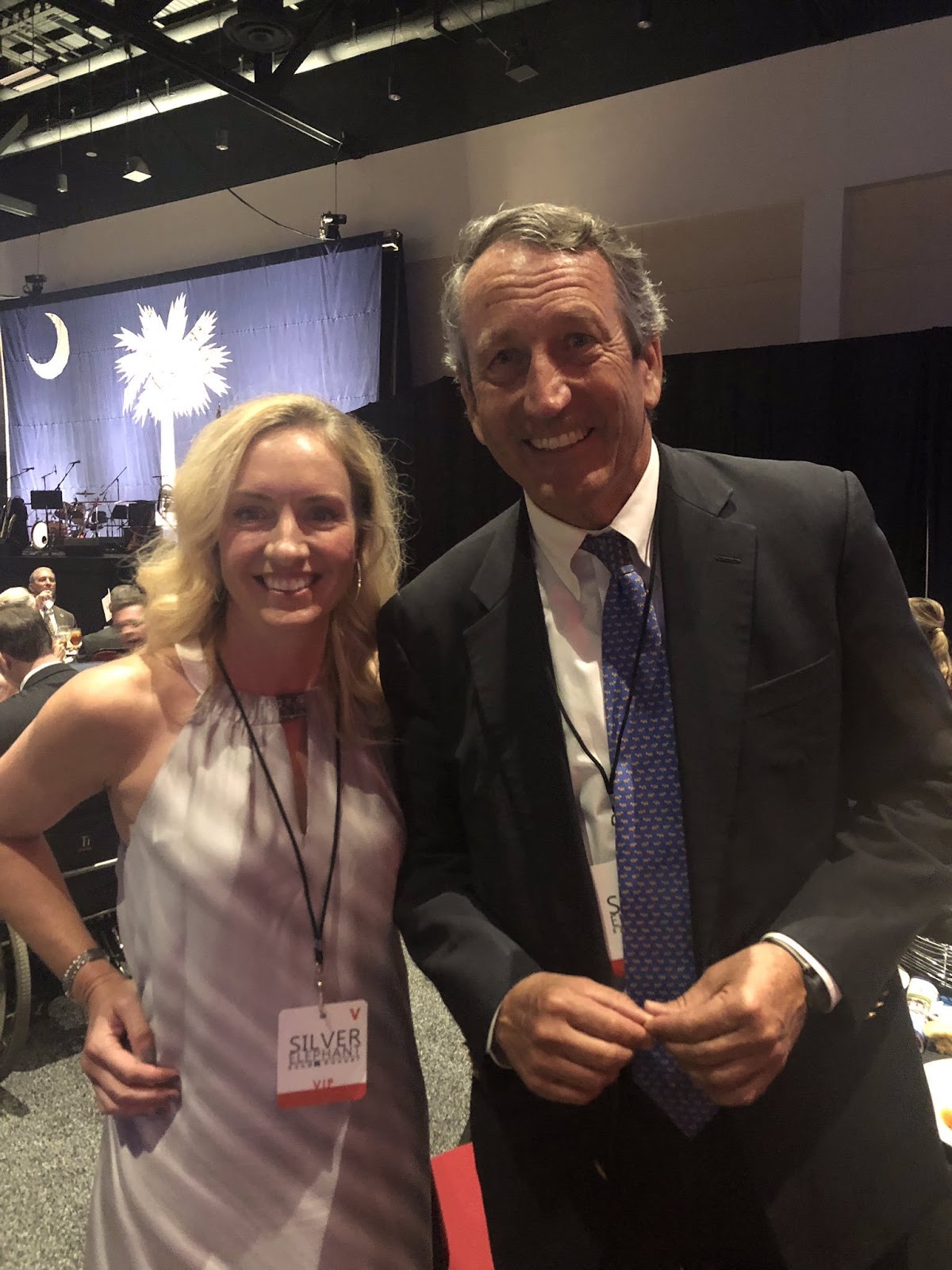 Amanda Phillips of Hilton Head Island, South Carolina, knows that Alzheimer’s cannot be ignored. Her father was diagnosed with Alzheimer’s and other dementias at 54 years old, and Amanda watched her mother care for him for over 20 years. For her, a candidate’s plan to address Alzheimer’s is about creating a better future for her family.

“I advocate for my daughter in case she becomes my caregiver,” Amanda says. “Or that if she gets the disease, she will be one of the first survivors.”

Amanda attended the Silver Elephant Gala in Columbia, South Carolina, where she spoke with former governor and presidential candidate Mark Sanford (R-S.C.). She emphasized the importance of his ongoing support to end Alzheimer’s and the impact it would make on so many lives.

“These candidates all know someone who has been touched by Alzheimer’s,” Amanda says. “That is something we all have in common. We need to encourage our candidates, and our next president, to be strong enough to make it uncommon.”

‘I want to get them talking about it … in their campaign platform.’

Kim Memmesheimer of Lee, New Hampshire, vividly recalls the first time she told someone that her mother had Alzheimer’s.

“The person just seemed to jump back,” she says. “It was so offensive, as if it was something she could control, rather than a disease attacking her brain. I said to myself, “This is not ok.’ And that’s how I became an advocate.”

Kim participated in more than a dozen “Conversations with the Candidate,” a series of intimate discussions between presidential candidates and residents of New Hampshire organized by ABC affiliate WMUR, and attended the New Hampshire Democratic Party State Convention. She’s been able to get in front of former Vice President Joe Biden (D), Sen. Cory Booker (D-N.J.), Sen. Elizabeth Warren (D-Mass.), and Sen. Kamala Harris (D-Calif.), among many others. 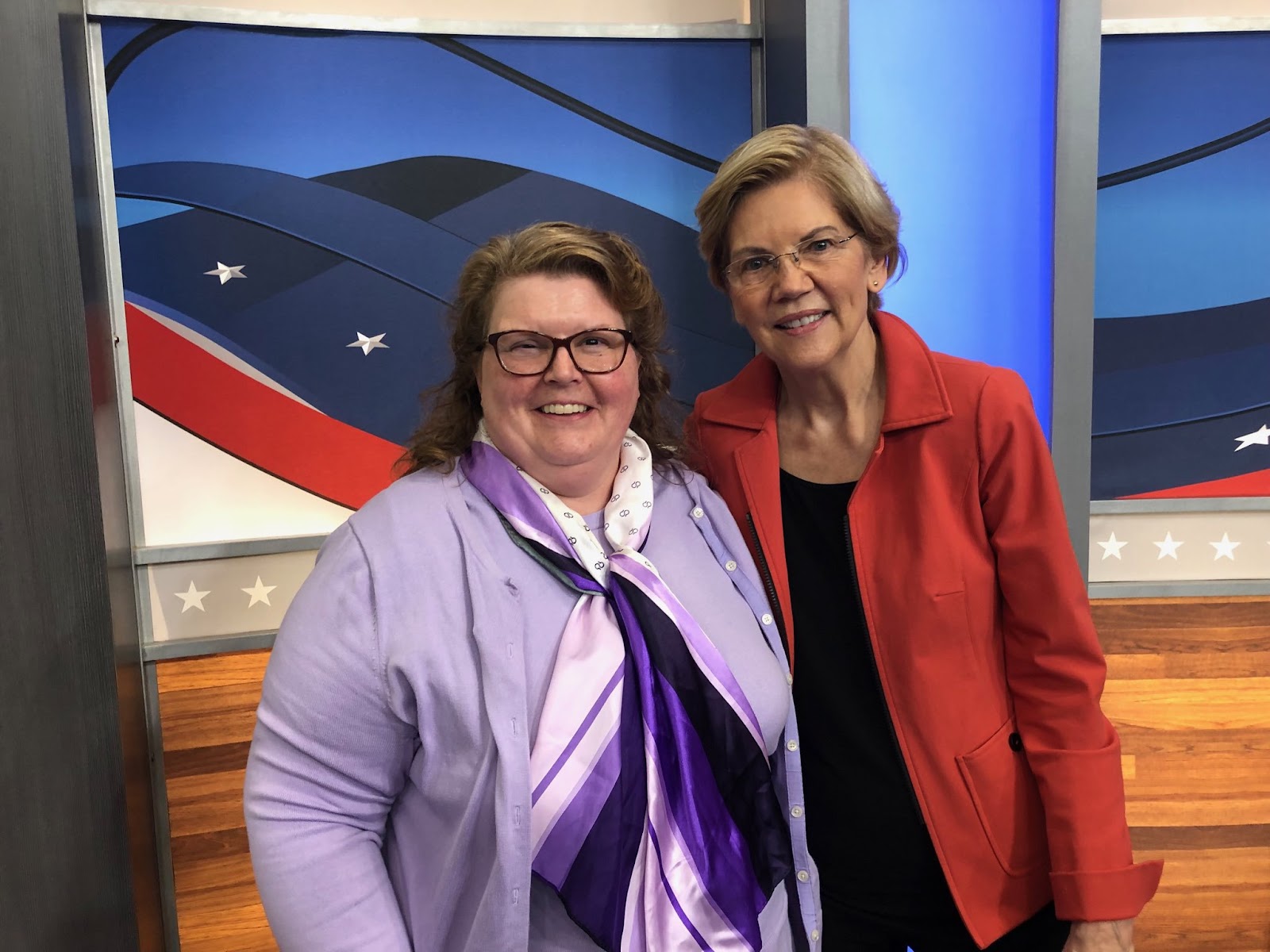 “Some of them have answers and some don’t, and I catch them off guard,” she says. “Others are able to speak to Alzheimer’s as it relates to other parts of their campaign platform, like health care, wage issues, caregiving and the economy.”

The conversation Kim had with former Congressman Beto O’Rourke (D-Texas) particularly resonated with her.

“He said his grandmother had Alzheimer’s and that his family had been through it,” Kim says, “and that we as Americans have a moral obligation to cure this disease. That stuck with me.”

Kim hopes her efforts will encourage candidates to include Alzheimer’s in their future plans.

“I want to get them talking about it, even if it ends up to be just one word in their campaign platform,” she says. “And ultimately, I want people not to jump when I say Alzheimer’s.”