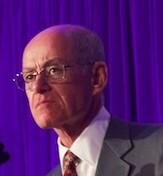 Mr. Thompson served as President and CEO of United Television, Inc. until its sale in 2001 to News Corp., a diversified international media and entertainment company. United Television was one of the country's largest operators of television stations, a producer of television programming and a founding partner in the UPN Television Network. Mr. Thompson currently consults for News Corp. and other television industry organizations. He is also a member of the University of Southern California's Presidential Associates.